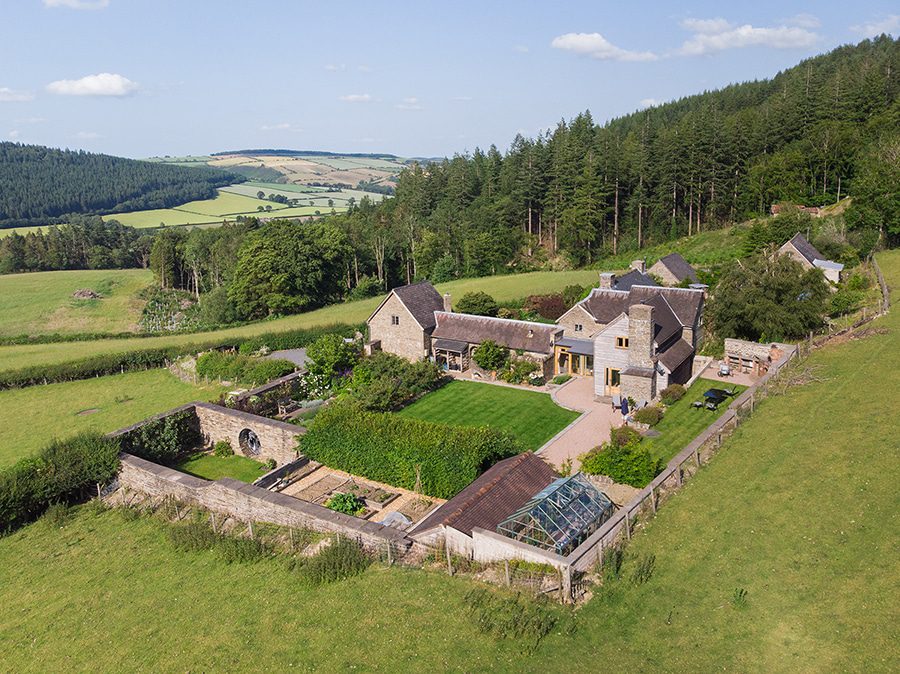 A remarkable courtyard of buildings with spectacular gardens and dreamy views.

Some 25 years ago, all that existed on this site was a small stone bothy, surrounded by fields, called Woodside Cottage.  Uninhabitable then, but over a period of some 10 years, today Pooh Hall ( named by the previous New Zealand owner) is an unbelievable transformation with the creation of  fine buildings  which were finally completed in 2005.  The gardens also took shape during this time and have been developed ever since and are spectacular. Whilst the cottages have more recently been used as holiday cottages, they could equally be put to alternative uses. For example Keeper’s Cottage is already in part linked to Pooh Hall and could become fully integrated, whilst other cottages could provide alternative accommodation for family and friends or provide space for offices, workshops or studios.  The holiday cottage web link is http://pooh-hallcottages.co.uk/. The cottages won the gold award for holiday of the year from the Heart of England in 2005.

The historical town of Clun, once upon a time along a major drover’s route, is delightful. The houses are full of character and the old bridge a central feature of the town. It has a post office within the convenience store and tea rooms. There are two pubs, a primary school and  two community halls. Craven Arms close by provides a wider choice of facilities as well as a train station ( Crewe/Manchester to Cardiff line) and the A49 giving quick access to Shrewsbury to the north and Ludlow to the south.

Pooh Hall, east of Clun, stands on the side of the hill with fabulous views. The current owners, since 2003, have made significant additions  and changes. They have built Keepers Cottage and fully refurbished the other two cottages all for holiday rental purposes. Pooh Hall itself has also been rewired and replumbed as well as extended, with a new sitting room and bedroom above and a conservatory and the link, which includes store rooms and laundry rooms, to Keepers Cottage. The garden too has been created, along with all the stone walls from their own quarry, to establish the terracing and boundary walls. Local craftsmen have played a key part in much of the detail. For example elaborate iron work has been forged to create ornate bannisters and pilasters, curtain rails and tieback and gates, with the finest and most intricate of all, being the moon gate in the walled garden. There remains one extant planning consent for the construction of a barn running the length of the west wall.

Pooh Hall is approached up a long track. The lower entrance is a large gravel parking area with a pair of electronically controlled wooden gates into Pooh Hall. The higher brick and flagstone drive is through a pillared gateway guarded by Gate House Cottage. It leads directly into the courtyard and to Pooh Hall itself. The striking architectural features enveloped by the intrinsic garden are instantly delightful

The door into Pooh Hall brings you into the original building, which now is an attractive dining hall with a flagstone and quarry tiled floor and a Clearview stove in a deep inglenook fireplace and steps down to a small store room. The Kitchen has also been extended now incorporating a former archway that lead through into the garden. Fully fitted with bespoke units made by Sherwood of Nottingham, it includes a  2 oven gas fired AGA and a Karndean slate floor and steps down to a wine cellar and larder. The Drawing Room enjoys fabulous views and has a part oak floor and a wood burning stove. Off the kitchen is the back hall with a side door to the cottage gardens and a Conservatory with a door out to the house garden. The staircase rises to a half landing off which is a bathroom. There are three bedrooms on the first floor, off a landing with an airing cupboard and a shower room, which could be ensuite to the main bedroom.

The Courtyard of Cottages

The three cottages blend into the gardens and its surrounds. Gate House with its large glazed arch and front door leads directly into an open plan Living/Dining Room and Kitchen. A Clearview stove stands on a raised hearth and the Pineland kitchen units include a fitted oven and sink and there is a Utility Room off. The bathroom is a Japanese Duo bath with a large shower head above and also on the half landing is a door out on to the top terrace, the border of which is a hedge of contorted hazle. The bedroom has a panoramic windows along the whole elevastion.

Three stone arches beside the drive lead on to the lower garden. On one side stone steps lead down to The Bothy which is also open plan on the ground floor with a wood burning stove and fully fitted kitchen and sitting room. Off the staircase which rises to the bedroom, there is a large shower/wet room. On the other side of the garden is Keepers Cottage. Built in 2005 it complements the garden with its stone porch and terrace  and oak door opening into the large open planned living room with wood burning stove and framed window enjoying the views. The fully fitted Pineland kitchen has an oak floor. On the first floor is the bedroom and bathroom

The gardens of Pooh Hall are stunning. They are divided  by the buildings of Pooh Hall and Keepers Cottage. The terracing on the side of the cottages begin at the top terrace with its contorted hazle hedge which is enjoyed by the Gate House. The lower garden  below the three arches  is bordered by the houses and stone walling with a central  lawn has around edged with deep borders and enjoying  wonderful views. On the other side of Pooh Hall and Keepers Cottage are yet more formal gardens with an avenue of Midland Hawthorne leading into a walled garden at the end of which is the magnificent moon gate. Beyond is a further walled garden with stone arched windows in the wall providing glimpses of the countryside. A hornbeam tunnel links through to the lawn above, which is overlooked by a higher terrace with an outdoor pizza oven and at the far end a green house and garden sheds beside the vegetable garden.

The grass field above and to the side of Pooh Hall as well as the small field below amount to about 10 acres and is tenanted by a local farmer.

The fitted carpets are included. Light fittings, curtains, blinds and garden ornaments as well as cottage contents may be available by way of separate negotiation.

In Clun follow the A488 signposted Knighton, ahead you will see the Church. Turn left in front of the Church onto Vicarage Road take the next right turn signposted Woodside and follow this past the turning for Upper Riddings (right) and a farmyard (left). Take the next turn left which is a bye way (on the corner) ignore the first track on the right by the garage and continue to the next track which is a bridle path leading up towards woodland. Pooh Hall is at the top of this track.

A multi map can be found on the website at www.pooh-hallcottages.co.uk.   The satnav stops at the turning onto the bye way.

By appointment with the selling agent.