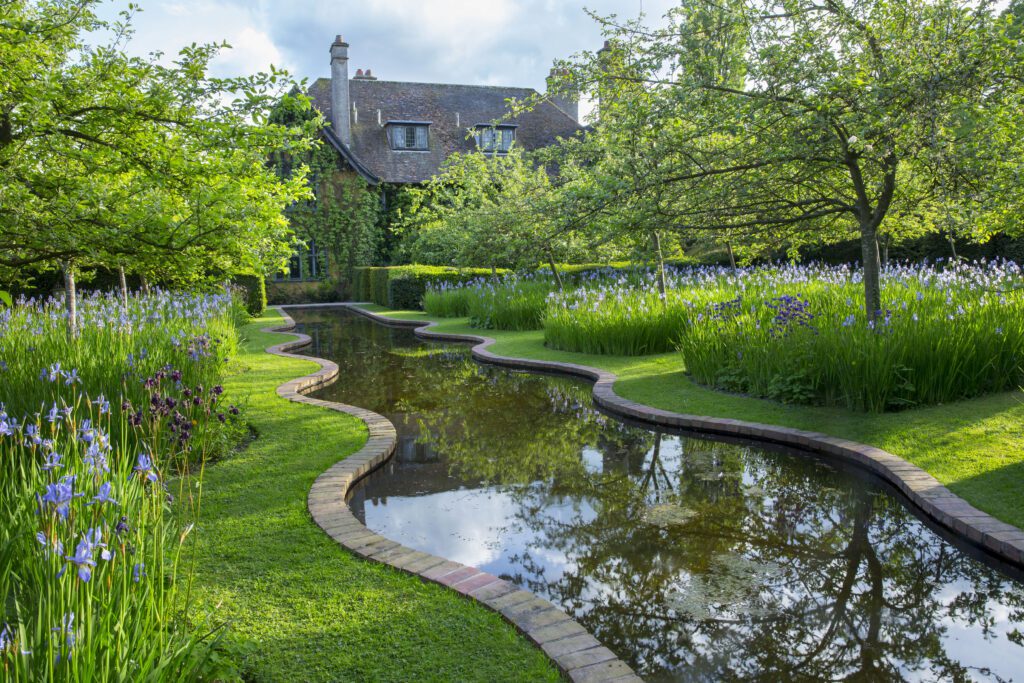 In all about 25 acres

For utter peace and tranquillity amidst dramatic rural surroundings, the countryside east of Presteigne along the Lugg valley is some of the finest in England.  Presteigne, formerly the old county town of Radnorshire is an architectural delight with a great sense of community. The Enterprise Park provides local employment and the town has a doctor’s surgery, pharmacy, greengrocer and fishmonger, two small supermarkets, a delicatessen, cafes, antique shops, a good primary school and the John Beddoes secondary school. Private schools such as Moor Park near Ludlow, Lucton School and Hereford Cathedral School are all within range.

Bryan’s Ground, overlooks the river into Wales and occupies some twenty-five acres.  Built between 1911–13, it was graced with a three-acre formal garden comprising several of the period’s Arts and Crafts signature components: sunken garden with circular water-lily pool and four surrounding flower beds, nascent yew and box topiary, a lengthy pergola for roses and the obligatory country-house tennis court and a three-quarter-acre kitchen garden, walled on two sides, a large greenhouse and the Lighthouse in which gas was made for lighting.

By 1993 the house and grounds had all but been abandoned. Since then among many other improvements it has been rewired, a new heating system installed, the Motor House converted and the Drawing Room extended. It was the garden however that was transformed and is now regarded as “one of the most important and enchanting of modern gardens.” Until recently these have been open to the public on a regular basis.

The canal, replacing the old drive which has been moved to one side, frames the substantial oak arched front door. The panelled lobby leads through double doors to the elegant hall. Parquet floors are mainly throughout the ground floor. Windows in the Drawing and Sitting Room enjoy views down the cuckoo walk and rose garden, whilst the Library with its ornate moulded ceiling steps out directly on to the terrace and loggia overlooking the sunken garden. Behind the “green baize door “ is the former kitchen now dining room and opposite the present kitchen/ breakfast room. Beyond the back stairs the conservatory acts as an excellent boot room and out into a small courtyard off which are the former tea rooms. The first floor comprises five bedrooms and three bathrooms (one ensuite) all off the wide long landing with its fitted bookshelves. At the far end the back staircase continues to the second floor where there are four further rooms, a bathroom and a landing large enough at one time to be a classroom.

The Motor House was converted some ten years ago. Close to the entrance and keeping its external features, it is a subtle conversion with a large living room/ dining room with a pair of French doors out into the garden and two bedroom, one with an ensuite bathroom and a kitchen also with a French door. Up stairs there is consent to create a further bedroom and bathroom (plumbing in place).

At any time of year surprises, vistas and delight are around every corner in this spectacular garden.  The guide which comes with the brochure along with the website  https://www.bryansground.co.uk explains in details the history and make up of the garden today.  Amongst the garden are follies such as The Lantern, The Sulking House Lynch Gate and Cricket Pavilion with each part of the garden having its own story be it in the old walled garden, tennis court, the cricket pitch, the former drive now the canal, or the area known as strong acre. The house sits comfortably in its setting and surroundings overlooking the “signature” sunken garden and across to the river. The wisteria terrace on a warm summer’s afternoon is perfect for relaxation before preparing for the evening rise on the river.

The river is designated an SSSI with the meadow in front of the house running down to the river. The field to the west has been in an arable rotation but could be put down to grass as well.

The fitted carpets are included in the sale. Items such as light fittings, curtains, garden furniture, ornaments and equipment may be available by separate negotiation

From Shobdon, continue on towards Presteigne on the B4362. Turn right at Combe towards Lingen and then shortly left, signed Stapleton. Bryan’s Ground is on the left hand side after about a mile.